The TempLS mesh anomaly (1961-90 base) was 1.032deg;C in February vs 0.979°C in January. This was a contrast to the NCEP/NCAR reanalysis base index, which barely changed. It makes it the second warmest February in the record, just behind the El Niño 2016 at 1.133°C. That is remarkable, because in this index February was the warmest month of that very stong El Niño.

The prominent feature, as with January, was a huge band of warmth stretching from Europe through to E Siberia and China. Again N America was also warm, except for Alaska (cold). Greenland and the Arctic archipelago were also cool. Africa and S America were mostly warm, Antarctica mixed.

Here is the temperature map, using the LOESS-based map of anomalies. 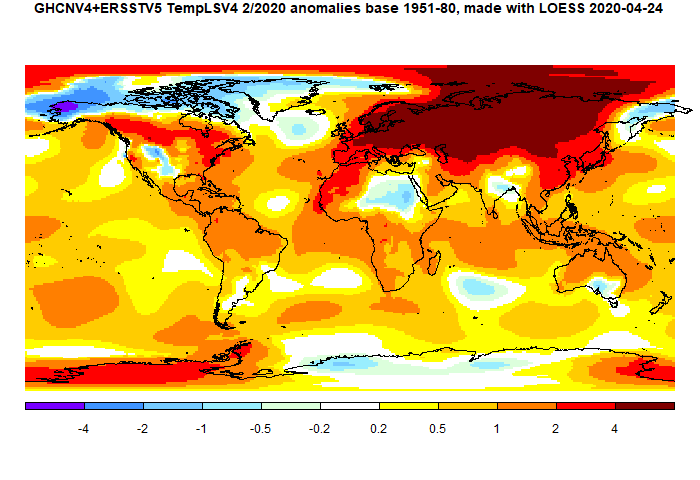 This post is part of a series that has now run since 2011. The TempLS mesh data is reported here, and the recent history of monthly readings is here. Unadjusted GHCN is normally used, but if you click the TempLS button there, it will show data with adjusted, and also with different integration methods. There is an interactive graph using 1981-2010 base period here which you can use to show different periods, or compare with other indices. There is a general guide to TempLS here.