The paper describing the new version V5 of ERSST has been published in the Journal of Climate. The data is posted, and there is a NOAA descriptive page here. From the abstract of the (paywalled) paper, by Huang et al:


This update incorporates a new release of ICOADS R3.0, a decade of near-surface data from Argo floats, and a new estimate of centennial sea-ice from HadISST2. A number of choices in aspects of quality control, bias adjustment and interpolation have been substantively revised. The resulting ERSST estimates have more realistic spatio-temporal variations, better representation of high latitude SSTs, and ship SST biases are now calculated relative to more accurate buoy measurements, while the global long-term trend remains about the same.

A lot of people have asked about including ARGO data, but it may be less significant than it seems. ARGO floats only come to the surface once every ten days, while the more numerous drifter buoys are returning data all the time. There was a clamor for the biases to be calculated relative to the more accurate buoys, but as I frequently argued, as a matter of simple arithmetic it makes absolutely no difference to the anomaly result. And sure enough, they report that it just reduces all readings by 0.077°C. That can't affect trends, spatial patterns etc.

The new data was not used for the June NOAA global index, nor for any other indices that I know of. But I'm sure it will be soon. So I have downloaded it and tried it out in TempLS. I have incorporated it in place of the old V3b. So how much difference does it make? The abstract says


Furthermore, high latitude SSTs are decreased by 0.1°–0.2°C by using sea-ice concentration from HadISST2 over HadISST1. Changes arising from remaining innovations are mostly important at small space and time scales, primarily having an impact where and when input observations are sparse. Cross-validations and verifications with independent modern observations show that the updates incorporated in ERSSTv5 have improved the representation of spatial variability over the global oceans, the magnitude of El Niño and La Niña events, and the decadal nature of SST changes over 1930s–40s when observation instruments changed rapidly. Both long (1900–2015) and short (2000–2015) term SST trends in ERSSTv5 remain significant as in ERSSTv4.

The sea ice difference may matter most - this is a long standing problem area in incorporating SST in global measures. On the NOAA page, they show a comparison graph:

There are no obvious systematic trend differences. The most noticeable change is around WWII, which is a bit of a black spot for SST data. A marked and often suspected peak around 1944 has diminished, with a deeper dip around 1942.

TempLS would be expected to reflect this, since most of its data is SST. Here is the corresponding series for TempLS mesh plotted: 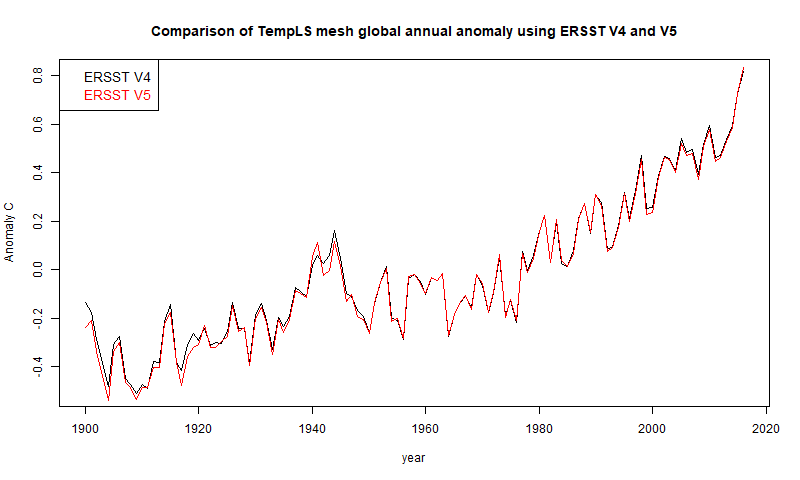