Down from 0.83°C in May to 0.82C in June (report here). I don't normally post separately about NOAA, but here I think the striking difference from GISS/TempLS mesh is significant. GISS went down 0.19°C, and TempLS mesh by 0.12°C. But TempLS grid actually rose, very slightly. I have often noted the close correspondence between NOAA and TempLS grid (and the looser one between TempLS mesh and GISS) and attributed the difference to GISS etc better coverage of the poles.

This month, the cause of that difference is clear, as is the relative coolness of June in GISS. With TempLS reports, I post a breakdown of the regional contributions. These are actual contributions, not just average temperature. So in the following: 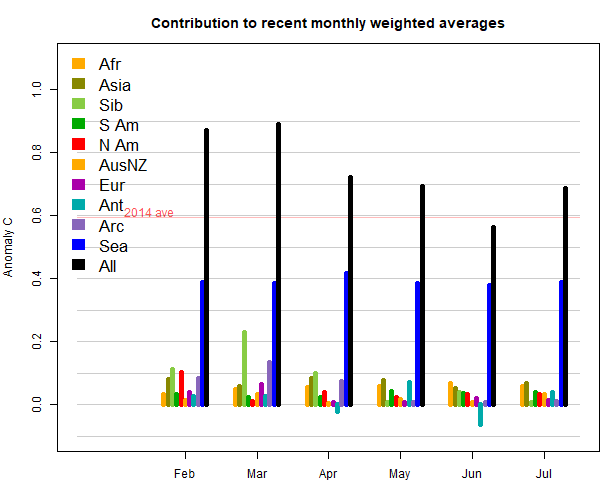 you see that the total dropped by about 0.12°C, while Antarctica dropped from conributing 0.07C to -0.07C, a difference that slightly exceeded the global total drop of 0.12C.

That doesn't mean that, but for Antarctica, there would have been no cooling. May had been held up by the relative Antarctic warmth. But it is a further illustration of the difference between the interpolative procedures of GISS and TempLS and the cruder grid-based processes of NOAA and TempLS grid. I would probably have abandoned TempLS grid, or at least replaced it with a more interpolative version (post coming soon), if it were not for the correspondence with NOAA and HADCRUT.

Update: I see that the paper for ERSST V5 has just been published in J Climate. I'll post about that very soon, and also, maybe separately, give an analysis of its effect in TempLS. I see also that NOAA was still using V4 for June; I assume they will use V5 for July, as I expect I will. The NOAA ERSST V5 page is here.

Here is the NOAA map for the month. You can see how the poles are missing.