I noticed in Roy Spencer's latest post the following observation:


Of course, everyone has their opinions regarding how good the thermometer temperature trends are, with periodic adjustments that almost always make the present warmer or the past colder.

It's true that adjustments at his UAH are less frequent. But when they happen, they are large. I decided to plot adjustments to UAH in this year, compared to the adjuatments in GISS (thermometer land/ocean) made over four years. The GISS version of Dec 2011 was the earliest I could find on the wayback machine. UAH brought out v6 in beta during 2015, replacing v5.6, which is however still maintained.

Update. I have found on wayback more GISS data going back to 2005 (the directory name had changed). I won't add it to the original graph; it is too close to the other GISS to show. I've added below the fold a graph of differences between each dataset, new minus old, to show adjustments on a better scale. The accumulation of 10 years of "periodic adjustments" to GISS is still dwarfed by the adjustment made to UAH in 2015.

I've set GISS to the UAH anomaly base, 1981-2010, and smoothed the monthly data with a running 12-month mean. I've used reddish for UAH, and blue for GISS.
Update: I have appended a plot including GISS 2015 an RSS, with better scaling, below. 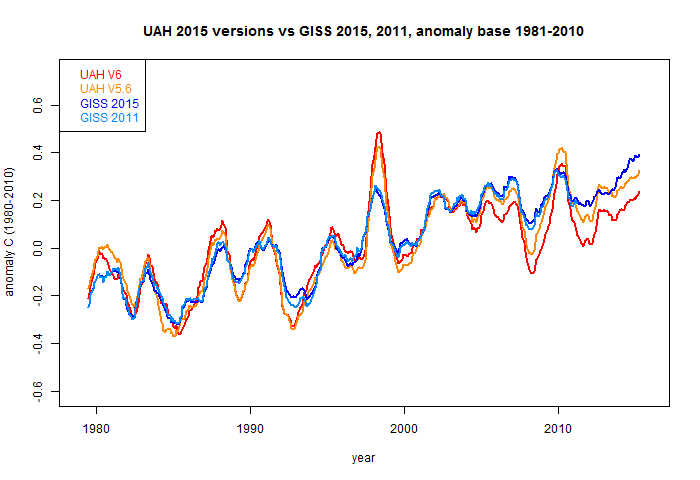 Eli has a forceful critique of UAH here. Measurement by satellite interpretation of a very indirect signal in a place that is hard to locate exactly is always going to be chancy. As Dr Mears, the man behind the RSS satellite measure, said, in discussing measurement errors:

His comment on agreement was made before UAH v6, which improved the agreement, but not confidence in their stability. I suspect that UAH (and RSS) should adjust more often, but that it is not done because of the inherent uncertainty.
Difference plot below 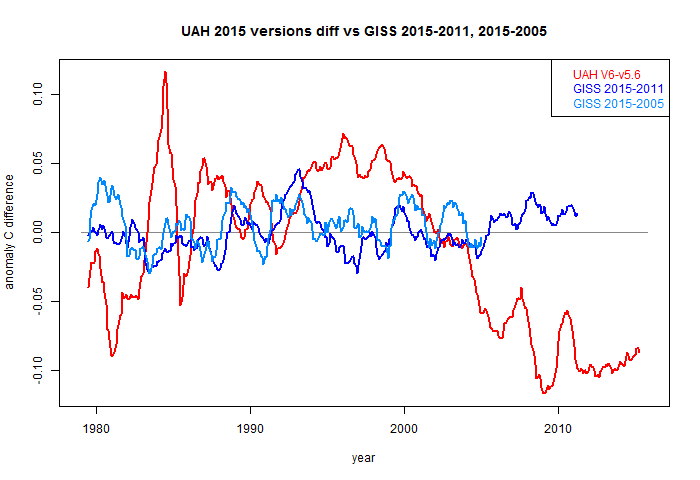 Now it is clear that even 10 years of adjustments to GISS are small in comparison to the adjustment to UAH this year.

Update - A zip file with the dta and code that I used is here. It just reads the data, resets the anomaly base, and plots.

Update: Here h/t ehak are Dr Spencer's similar plots. His amplitude is actually greater, since it isn't smoothed. But the pattern is the same.

Update: following the suggestion of reader Everett F Sargent below, I have redone the first plot including RSS (green). I have also added the GISS 2005 data and rescaled the y-axis. 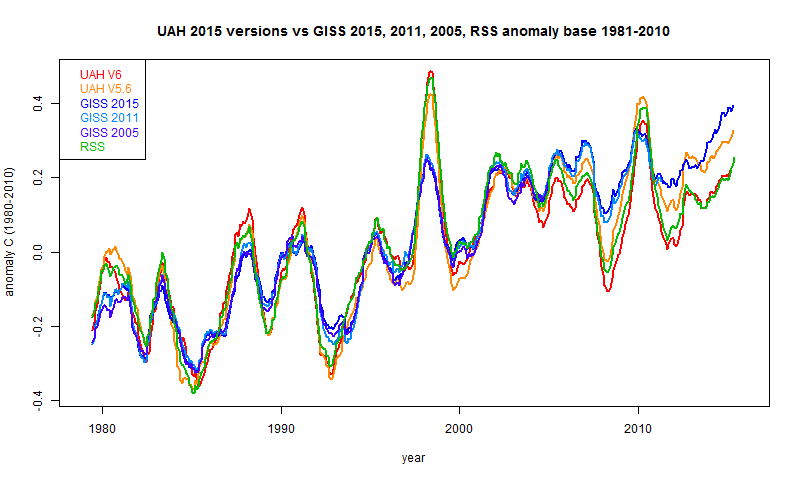