I wrote earlier about my use of land masks to sharpen up the boundaries of the ERSST data set that I use (and stop SST grid centres turning up on land). I have a more ambitious use in improving the weighting of the TempLS triangular mesh for land/sea difference. At present, many elements have mixed land/sea, and it is largely left to chance to get he balance right. I think that usually works out, but it would be better to have control.

A land mask is a big matrix of 1's and 0's corresponding to a grid, usually lat/lon. It has 1 if the cell is in land; it may also have a % where there is doubt, or may have a binary choice. There are a lot of land masks around, down to kilometer resolution if you want, but common ones are 1°, 1.2 and 1/4. That is what I will use (as used in the ISLSCP 2 project).

My general scheme is to refine the mesh to reduce the area of those spanning triangles. New nodes don't have new data attached, but their weight will be attributed to a land or sea station according to their placement.

I found that I would really like a more advanced mask, that actually gave a measure of the distance to the coast (for land and sea). It doesn't really increase the size of the mask. And it means that when I want to create a new node, I can place it toward the coast, instead of waiting for successive node generation to locate it. My scheme without this worked well for a while, but would create situations where new nodes would force a shift in some triangle that had all nodes on land. This happens because each mesh update is by convex hull formation, and with new nodes such a triangle might lose its tangent status.

So I set about making such a mask. I use a diffusion scheme. I mark the cells where land and sea adjoin, scored zero. Then next step I mark every neighbor cell on the land side +1, and on sea, -1. Then I mark their neighbors +2, -2, and so on.

But there is the problem of lakes. Masks generally show a lot of them, and I don't really want to know the distance to the nearest lake. So I first remove them. I do this by diffusion too. At this stage, I have the original 0,1 mask. I first advance the land by marking each of the 1 cells with a 1, and then again. That fills in most lakes, but also a lot of sea, especially bays etc. So then I diffuse back, advancing the 0's. This won't help the inland lakes, but will restore the sea cells to 0. Then I use the original mask to restore all land to 1 status.

I'll show below how this all works. It has enabled the overall aim, a coast-hugging triangular mesh, which I'll show in my next post. I have put the results as a R data file here. It is a list "mask"; the components are a letter (q for original, a for lake-less, and n with dist to sea), and 1,2,4 for cells per degree.

Here is an image of the original mask, 1/4° resolution. Click to enlarge any images 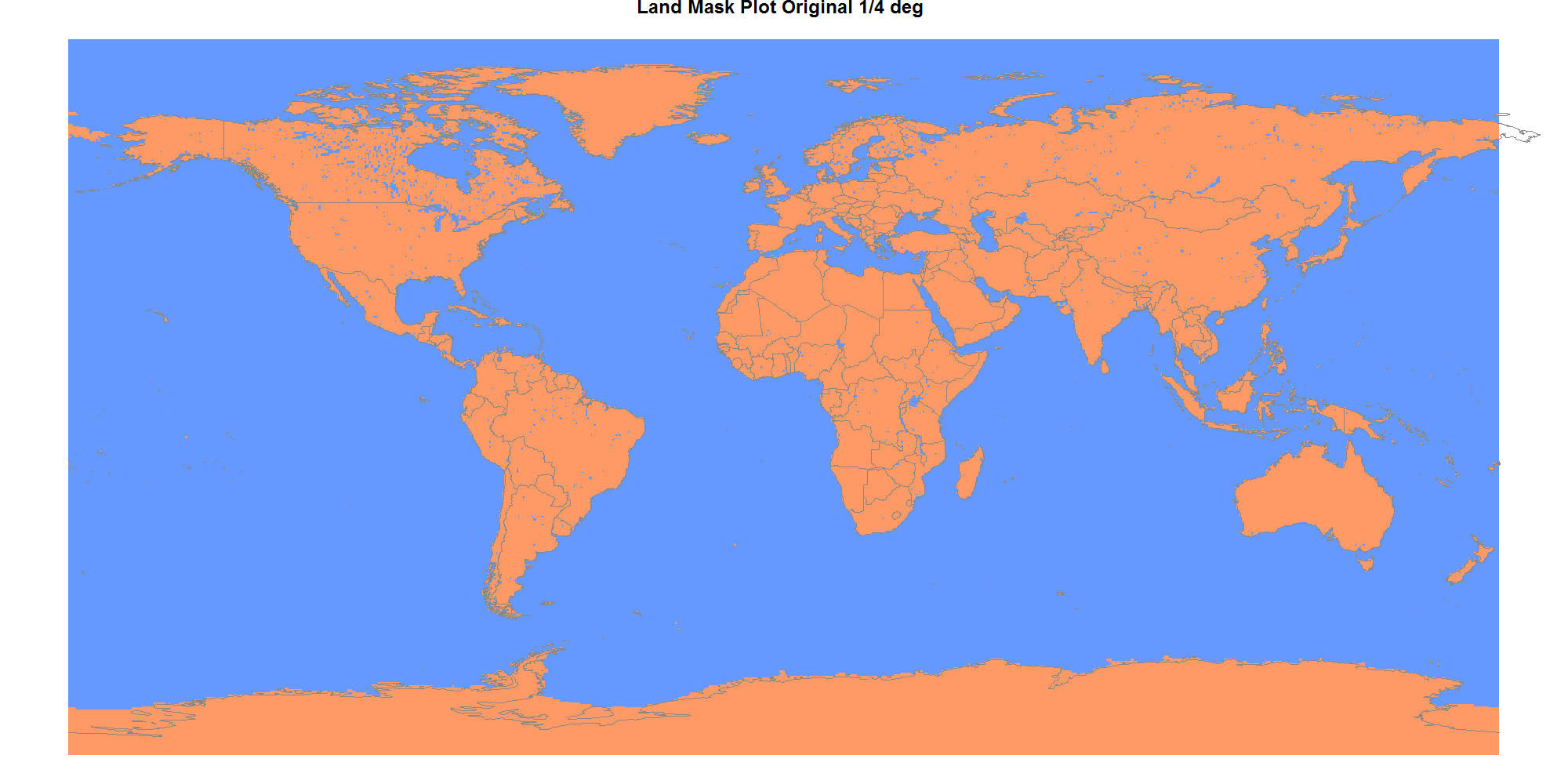 And here it is with lakes (but not islands) removed. A few survive; there may be actual ERSST data in the larger ones. 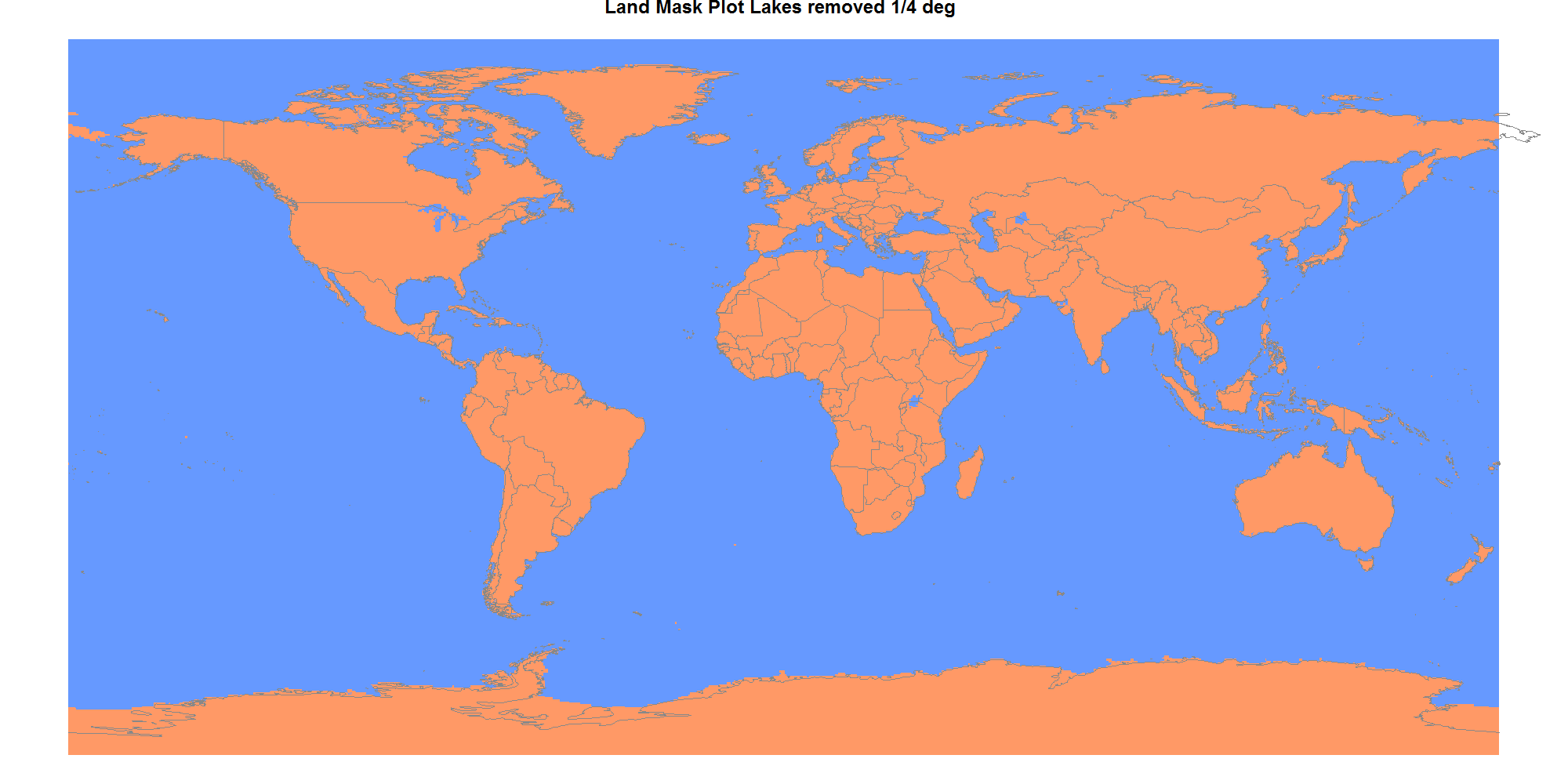 And finally, here is the shaded map of the distance data. You can see the effect of islands; lakes would have been the same. But islands are quite likely to have land stations, so should be retained. 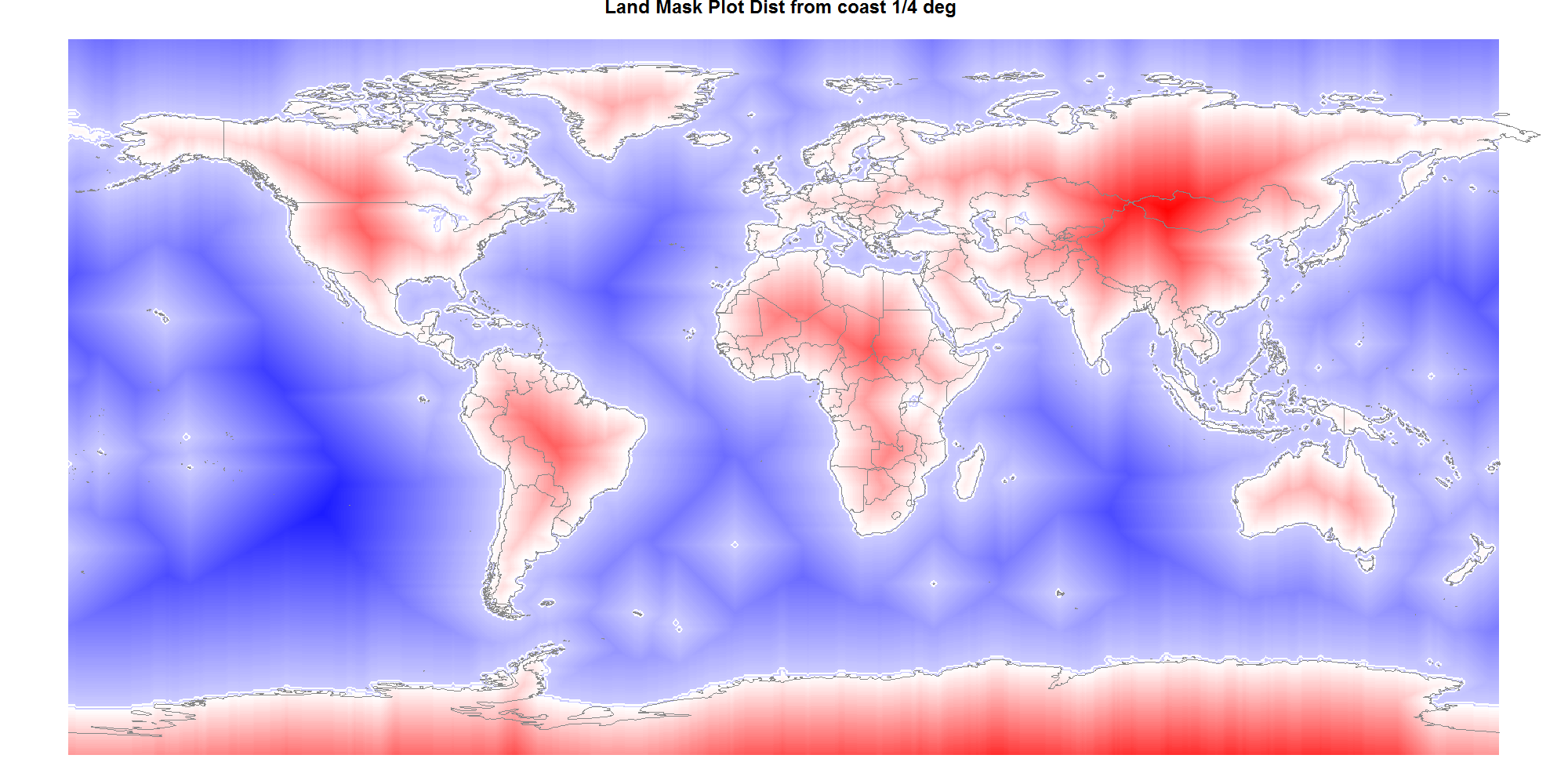